According to the New York Times, 34 year old heavily armed Aaron Alexis shot and killed 12 people working at the Washington, D.C. Navy Yard this morning, injuring others. As will happen once again, national hand-wringing ritual follows, trying to make “sense out” of the irrational. Pundits, including psychiatrists, will be asked to speculate on his motive, his mental state, his ties to the Navy, his possible grievances, his claim after a 2004 arrest that 9/11 “disturbed” him (he was arrested in Seattle in 2004 for shooting out the tires of a car belonging to a man who, he told police later, he believed had “mocked” him), the fact that he was arrested again in 2010 in Fort Worth, Texas, on charges of discharging a firearm,  the fact that Aaron Alexis was an employee of a company called ‘The Experts,’ a subcontractor to an HP Enterprise Services contract to refresh equipment used on the Navy Marine Corps Intranet (NMCI) network. However, with no disrespect for the tragedy he unleashed this morning upon 12 innocent individuals and their families, these are all the wrong questions. They are quite literally beside the point.

What is the point? The single and the only relevant point is that we have a medical epidemic of gun violence across our nation, not just today but every day, 365 days a year, because our laws permit citizens to purchase and use assault firearms, weapons of war that have the sole purpose of killing humans and killing as many people as possible rapidly. Forget the fact that at least 40% of weapons sold in the U.S. can be purchased without background checks. Forget the fact that this man was arrested at least twice over the past decade on charges of firearm violence. We are like the ignorant physicians in the Middle Ages trying out spurious theories to explain the Black Plague. Pundits, then, reasoned that perhaps people died in the plague because of their sins and God was punishing them. Or perhaps it was evil humours floating mysteriously through the atmosphere.

Today we know that those theories were ridiculous, at least by the standards of 21st Century science (though there are those among us who still deny even science today, 500 years later). Bubonic plague is a zoonotic disease, circulating mainly in fleas on small rodents and is one of three types of bacterial infections caused by Yersinia pestis (formerly known as Pasteurella pestis), which belongs to the family Enterobacteriaceae. Without treatment, the bubonic plague kills about two thirds of infected humans within 4 days.

However, today, because we understand the mechanism of the disease, i.e., what is the vector (rodent fleas) and what is the pathogen, a bacterium,  we can cure it promptly and effectively with any one of a number of antibiotics (streptomycin, gentamycin, tetracyclines and ciprofloxacin) that irradiates the cause, the pathogen.

Yes, the NRA is at least half correct when they point out that humans, not guns, kill people. Humans are the vector. But guns, especially guns that have been specifically designed to be efficiently and rapidly lethal, are the pathogen. That is what kills us and without that pathogen, even crazy “vectors” among us are rarely lethal. We humans, the vector of this epidemic, harbor within our highly evolved brains, a reptilian primitivity that acts reflexively, not thoughtfully, let alone morally, and that if armed, can be lethal. As universally as rodents attract fleas, we are subject to mood swings, anger, rage, brooding, some of us even mental illness. These behaviors have been present within the human race since time immemorial. Unfortunately, they are not going to “evolve” out of us, transforming humans into Spock from StarTrek, anytime soon.

However, the good news is that there is a cure for this lethal pathogen. Virtually every other nation in the civilized world has employed it. They have adopted strict laws prohibiting civilian ownership of weapons of war. And virtually every other nation in the civilized world reports few if any new cases of the plague of mass shooting rampages of the kind that we witness unleashed this morning at the Washington Navy Yard and that in recent history has been recurring over and over and over again.

If we want to end the epidemic of gun violence within America, a distinction that makes us tragically flawed compared to our allies and neighbor nations, the treatment is quite simple and proven to be highly effective: Make it illegal for civilians to purchase or possess weapons of war and confiscate those that are currently in circulation. The penalty for violating such a rational law should be prison because someone who possesses an assault weapon is directly or indirectly the vector of a lethal disease that is literally plaguing every level of our society, a modern day “typhoid Mary.”

Sadly, for a majority of our elected political so-called leaders to act rationally in the face of this clearly lethal epidemic, requires courage, a resource in frighteningly short supply within the halls of great power in Washington.

But just ask yourself how many people have been killed in the past decade by chemical weapons, a weapon of war that we all readily join the chorus to abhor? 1000, perhaps? In the U.S. in  2010 alone, guns took the lives of 31,076 Americans in homicides, suicides and unintentional shootings.  This is the equivalent of more than 85 deaths each day and more than three deaths each hour.1 And yet we are ready to go to war to make a moral point that the use of poison gas in warfare, which has been used for the first time in 30 years, is abhorrent, but we and our elected leaders do not have the moral backbone to pass an assault weapons ban when more than 30,000 of our fellow American died as a direct result of gun violence in a single year? What is wrong with us as a thinking people? Wasn’t it President George W. Bush who told us “There’s an old saying in Tennessee…fool me once, shame on…shame on you…fool me…ya’ can’t get fooled again!” How many times do need to be fooled?

Gunman and 12 Victims Killed in Shooting at D.C. Navy Yard

WASHINGTON — At least 13 people, including one gunman, were killed, and the police were looking for other potential suspects, in a shooting Monday morning at a naval office building not far from Capitol Hill and the White House, police officials said.

One police officer was in surgery after being shot in an exchange of fire with a gunman, said Chief Cathy L. Lanier of the Metropolitan Police Department. The shootings took place at the Washington Navy Yard, in the southeast part of the city.

According to the Navy, Mr. Alexis enlisted as a full-time reservist in May 2007 and left the service in January 2011. He served as an aviation electrician, and the highest rank he achieved was mate third class. From February 2008 to January 2011, he was assigned to Fleet Logistics Support Squadron 46, in Fort Worth.

The Navy said Mr. Alexis had been awarded the National Defense Service Medal and the Global War on Terrorism Service Medal.

Shortly after 4 p.m., the F.B.I. released a “Seeking Information” bulletin asking for the public’s help in learning more about Mr. Alexis. The bulletin, which had two photographs of Mr. Alexis, said he was 6 feet 1 inch tall, weighed 190 pounds and was born in Queens.

Valerie Parlave, the assistant director of the Washington field office of the F.B.I., urged members of the public to look at pictures of Mr. Alexis on the F.B.I. Web site and to call with any information they might have about him.

“No piece of information is too small,” she said. “We are looking to learn everything we can about his recent movements, his contacts and his associates. We ask the public to look at the photos of the deceased shooter.”

Three weapons were found on the gunman: an AR-15 assault rifle, a shotgun and a semiautomatic pistol, an official said. 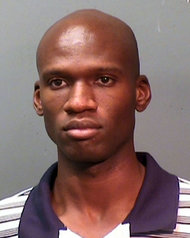 A 2010 booking photo of Aaron Alexis, who has been identified by the F.B.I. as the suspect in Monday’s shooting. Mr. Alexis was arrested in Fort Worth in 2010 on suspicion of discharging a firearm, according to The Associated Press.

The New Science of MindHow Did Aaron Alexis Get a Security Clearance? Scroll to top